Have you ever had someone offer you a spicy dish such as chili and warn you that it is hot? All the while you are wondering, just how hot is this dish? The amazing thing is that in the world of spices we actually have a way to measure heat.

The heat rating of a particular spice is determined by using the Scoville Rating Scale. This rating scale is named after its creator, American chemist, Wilbur Scoville. Scoville invented the “Scoville Rating Scale” in 1912 to measure the amount of spicy taste of peppers and chillies.

The Scoville Rating Scale is actually a measure of the concentration of the chemical compound capsaicin which is the active component that produces the heat sensation for humans. This scale is reported in Scoville heat units (SHU). The higher the SHU the hotter the pepper.

Practical Examples of The Scoville Scale

Our Cayenne Pepper 15K, means that this spice is considered to contain approximately 15,000 SHUs. As a general rule, our 15K pepper is considered to rate as mild to medium. Our 40K cayenne is rated as medium to medium-hot. Our cayenne pepper 90K is super hot!

As of this writing, the hottest pepper in the world is the Carolina Reaper measuring at 2,000,000 Scoville Heat Units! Imagine how hot that must be?

We don’t carry the Caroline Reaper, but do carry the Ghost Chili Pepper Powder which was considered the hottest pepper in 2007, and one of the peppers crossbred with red habanero to create the Carolina Reaper. Our Ghost Chili Powder measures over 1,000,000 SHU!

When ordering peppers from MySpicer just remember that no matter which heat rating you choose, our spices are always pungent and fresh. And, a little goes a long way! 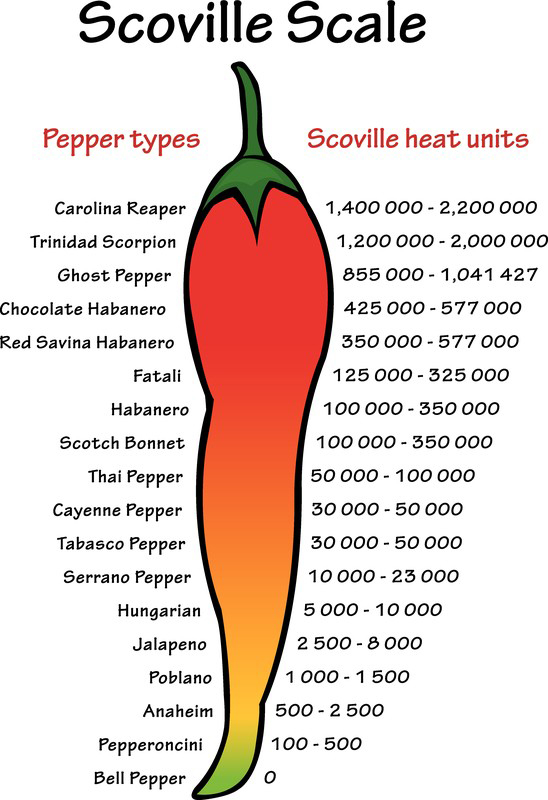